Super73-RX Electric Custom Goes to the Dark Side 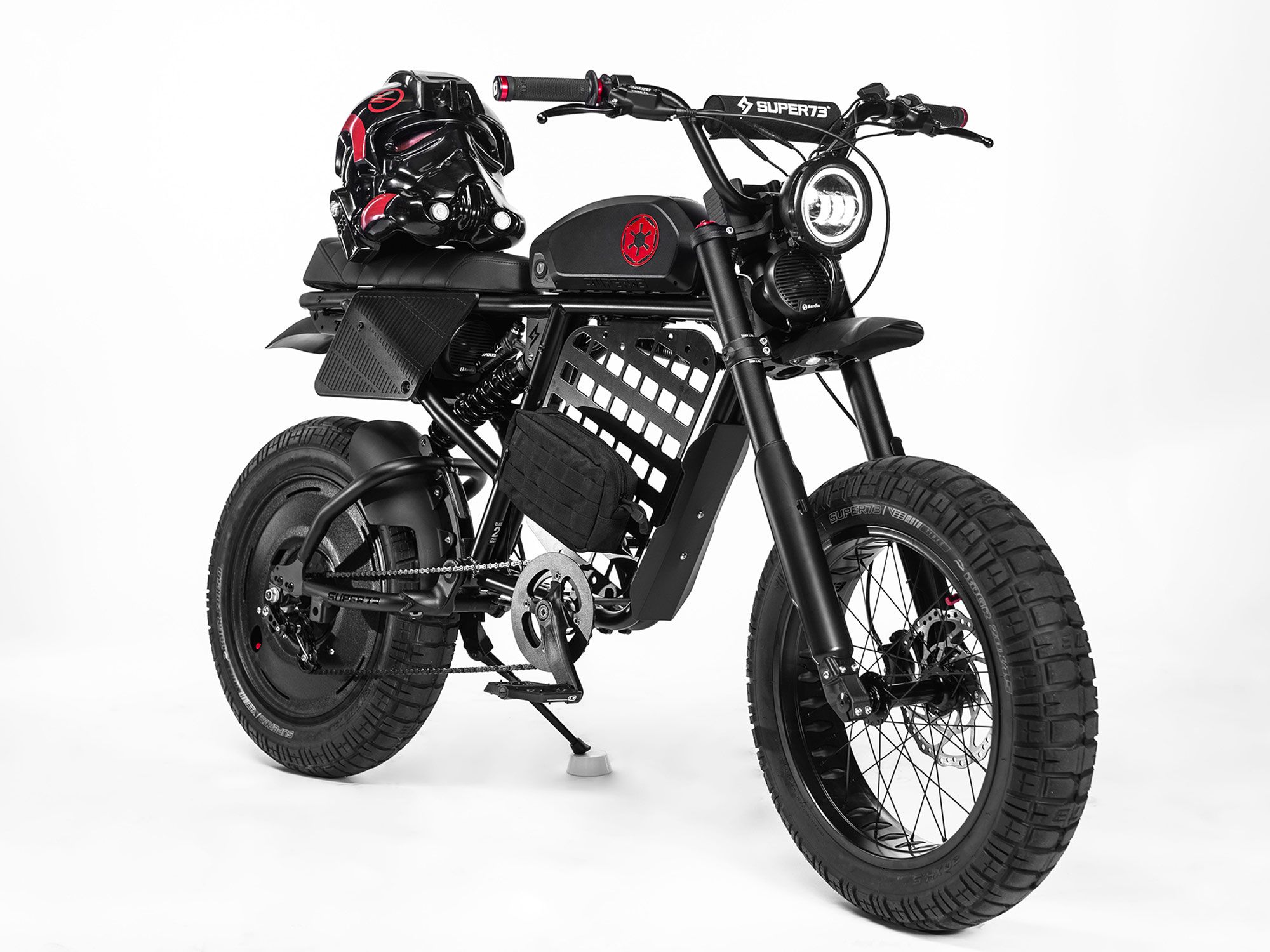 The Wookies had a flying catamaran, Anakin had a podracer, and even Jabba—yeah, Jabba the friggin’ Hutt—had his own surface vehicle in the Star Wars movies. Jabba’s transportation was a barge, but the never-ending sci-fi series always seemed skimpy in the two-wheeler category, which struck us as an opportunity missed. But now Super73 has built a custom bike that feels like it could have been right at home in the Tatooine desert with a design based on the iconic TIE fighter, and even packing what they’re calling “lightsaber technology.” 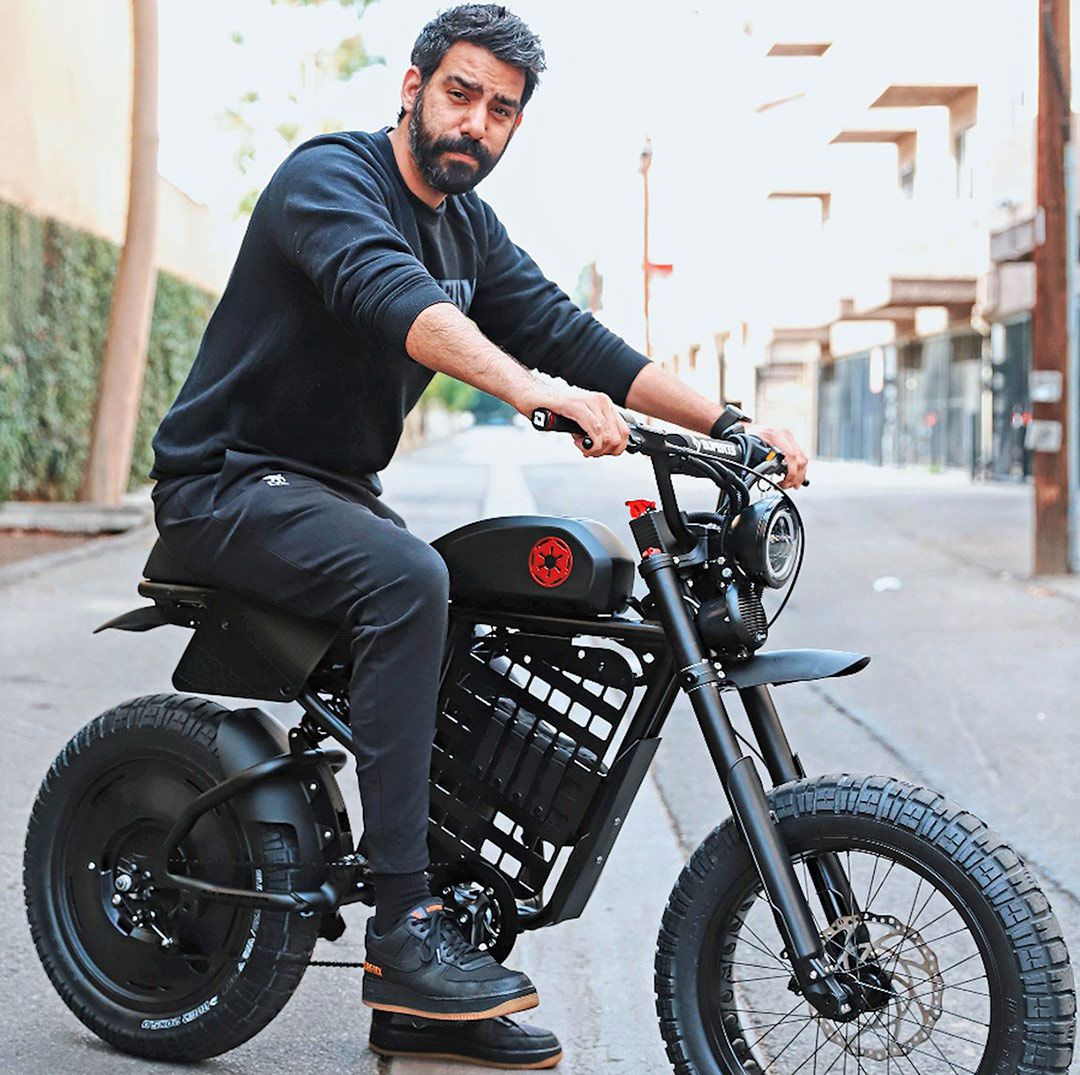 The bike is based on Super73′s top-of-the-line RX model, which isn’t a bad choice as far as foundations go, since that model rocks the company’s most powerful drive system and an aircraft-grade aluminum alloy frame supported by fully adjustable suspension front and rear (check out our review of the closely related S2 model here). A powerful brushless DC hub motor can crank out up to 2,000 watts of power and the whole thing rides on super-wide all-terrain BDGR tires (a whopping 5 inches wide). 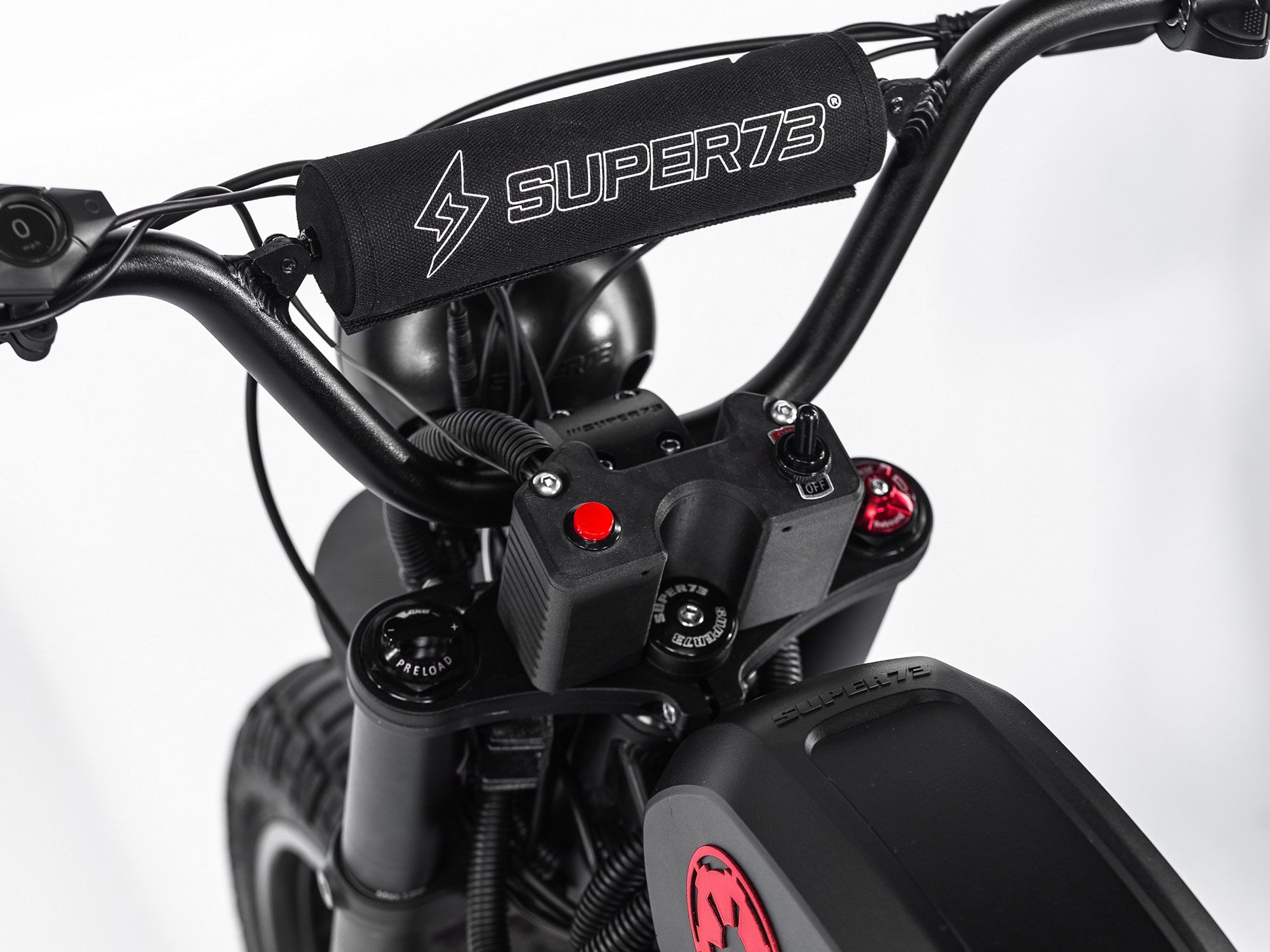 A custom switch (on the right) operates the lighting effects, while the red button turns on the sound of laser blasters. That’s a speaker mounted across the handlebar. (Super73/)

For the Star Wars treatment, the RX got a menacing color scheme inspired by the TIE fighter, with the entire frame dipped in matte black and the addition of metallic red “Imperial cog” badges to the top-mounted battery case. Super73 also fashioned red LED “underglow” lighting effects, carefully routing the wiring into thick, Imperial-inspired looms. The bike also received a set of Crankbrothers Stamp pedals and a pair of ODI lock-on grips, with Saddlemen Seats providing a ribbed, full-grain black leather seat for the pilot to perch on. 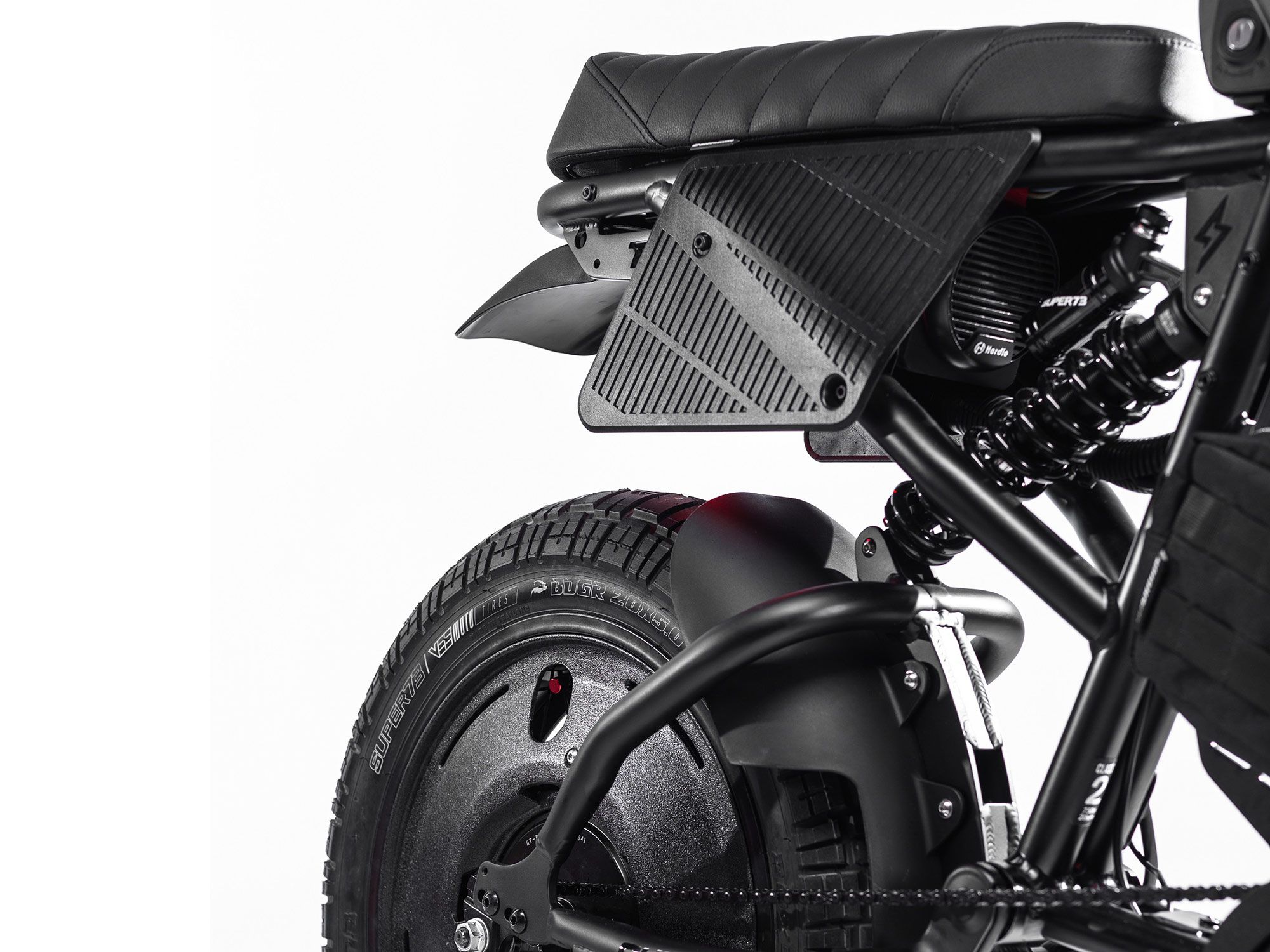 The rear looks battle ready thanks to 3-D-printed covers and number plates. The custom saddle is courtesy of Saddlemen. (Super73/)

That pilot by the way—and the impetus behind the build—is actor and Star Wars fanatic Rahul Kohli, best known for his roles in iZombie and The Haunting of Bly Manor. In fact, Super73 pulled out all the stops, even embroidering that seat with Kohli’s initials and the Roman numeral 13—his favorite number. But getting the custom bike to look a little more battle ready proved to be a challenge, so Super73 turned to industrial designer Ian Chambers, who 3-D-printed rear wheel covers and a milled MOLLE panel tucked into the center of the frame to allow for the addition of modular bags and to give it some heft. Meanwhile, stylized number plates out back carry the dark Imperial vibe even further. 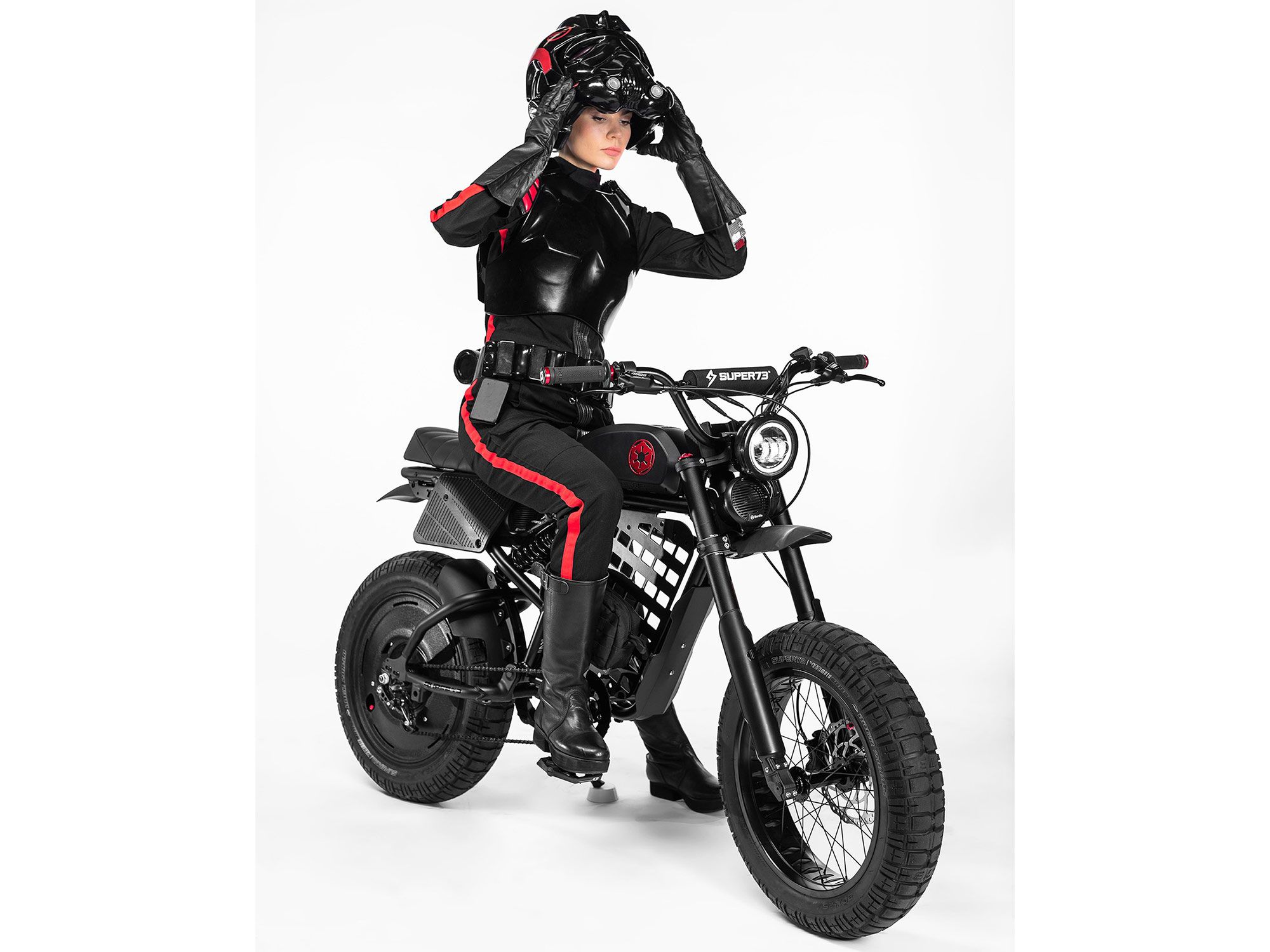 Suiting up for battle? Maybe. All we know is that it’s not Kohli. (Super73/)

But why build it now? Super73′s Chief Marketing Officer Michael Cannavo explains, “Rahul has been having fun with the Star Wars fandom since rumors about him playing a certain Jedi spread through the internet in 2020. This bike is our way of showing we’re with him every step of the way!”

And what’s the so-called lightsaber tech all about? “We connected with some of the top builders in the movie props business to obtain the advanced control board…and sound effects used by Lucasfilm prop makers. Famous lightsaber prop installer Jonathan Rossi did the preliminary programming, and Super73 lead engineer Harrison Lu ensured it communicated with the Super73-RX. Additionally, Lu developed…a switch to operate the LED underglow, and a red button to activate…Star Wars-inspired sounds.… The button emits the sound of laser blasters being fired,” Cannavo says.

If you think Kohli would be pretty stoked to take delivery of his custom Super73-RX, this quote confirms it: “I was floored by the style and design [and]…those sounds instantly brought me back to being a kid, imagining myself riding across the Tatooine desert, Padawan braid blowing in the wind, scowling and looking for a Tusken raider camp!”

Yeah, that’s what we thought.

Check out the video of the bike in action here.